Miss Sovannadany Narita is 7 years old and is in the 2nd grade. She’s a loving big sister and an excellent student.

Narita lives with her baby brother Kevin and her parents Sovanna and Dany. A year after returning to their hometown in Cambodia from a scholarship in Japan, Sovanna and Dany were invited to church and became disciples of Jesus in Kampong Cham. Shortly after that, they had a baby girl, Narita, whom they named after the airport near Tokyo. Unfortunately, Sovanna strayed away from God’s teachings and left Dany to care for Narita by herself for several months at a time. Dany remained faithful to God in spite of the pain and challenges she went through. She continued to show unconditional love and forgiveness to Sovanna, and four years later he came to his senses and reconciled with his wife (August 2016). Today, Narita and Kevin are blessed with a loving family and wonderful, faithful parents. 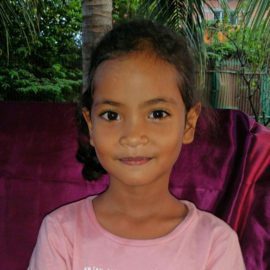 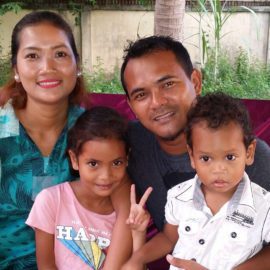