Miss Sam Rosica is 8 years old and is in the 4th grade this school year. She loves to study, sing, and is an excellent student. This past school year she placed first in her school’s English Program.

Rosica lives with her brother Makara (16 years old), brother Kevin (6 years old), and his parents Sam Sokchea and Siden Kun (known as ‘Huy’ among friends). Sokchea and Huy went through a lot early on in their marriage – from Huy battling with cancer to nearly getting a divorce. Huy’s two sisters and brothers-in-law are disciples, and they all prayed for Sokchea and Huy to find God and become Christians. Shortly after the birth of their second child (Kevin, or ‘KK’) their marriage was on the brink of collapse. It was then that Sokchea decided to study the bible. He repented and made it right with Huy. Huy forgave him and also studied the bible, and they were soon both baptized into Christ. 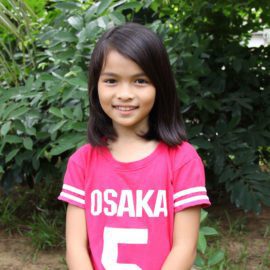 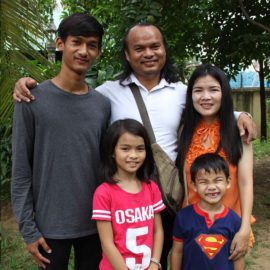 Especially The Family (ETF) was started by a small group of disciples. We forward 100% of your financial donations directly to the individuals, families or programs you choose to support.

Select an immediate need to support or If you prefer to instead make a general donation to the ETF program, please do so here: