Mr. Sam Kevin (or ‘KK’) is in the 2nd grade and loves school. He also loves to run, and like his older brother, has the makings of a future soccer player!

KK lives with his brother Makara (16 years old), sister Rosica (8 years old), and his parents Sam Sokchea and Siden Kun (known as ‘Huy’ among friends). Sokchea and Huy went through a lot early on in their marriage – from Huy battling with cancer to nearly getting a divorce. Huy’s two sisters and brothers-in-law are disciples, and they all prayed for Sokchea and Huy to find God and become Christians. Shortly after the birth of their second child (Kevin, or ‘KK’) their marriage was on the brink of collapse. It was then that Sokchea decided to study the bible. He repented and made it right with Huy. Huy forgave him and also studied the bible, and they were soon both baptized into Christ. 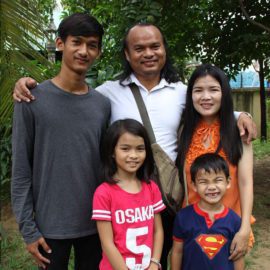