Mr. Im Chailay’s mother was a struggling single mom. In desperation, she left 3-month old Chailay in the care of her older sister, who in turn adopted Chailay to be her own son. Chailay’s adoptive mom struggled to raise him, having two daughters of her own to feed. At times she couldn’t afford to buy milk, so she nursed him with porridge water. In 2012 Chailay’s adoptive sister, Chheyran, became a Christian in Battambang. She repented of her resentment towards Chailay’s adoption and started caring for him. She shared her faith with her family, and Chailay started coming to church regularly. Chailay’s biological mom also studied the bible and became a disciple of Jesus in Phnom Penh in 2014, bringing about healing in her relationship with Chailay. Chailay saw God’s love, began to study the Bible, and got baptized into Christ in February 2016.

At 16 years of age, Chailay is in the 11th grade. He was struggling in school when he first started coming to church, but now is a conscientious student. He is also a star player of both his school’s soccer team, as well as the Battambang Church of Christ’s youth soccer club, of which he is Team Captain.

Im Chailay’s family is seeking assistance for their child’s educational needs for a one-year period including tuition, books, and uniforms. 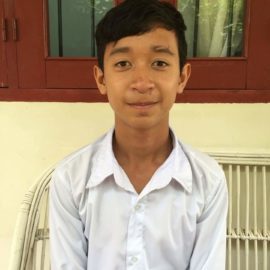 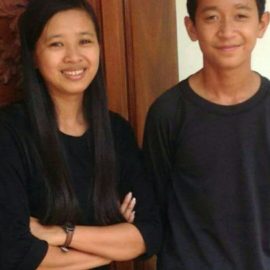